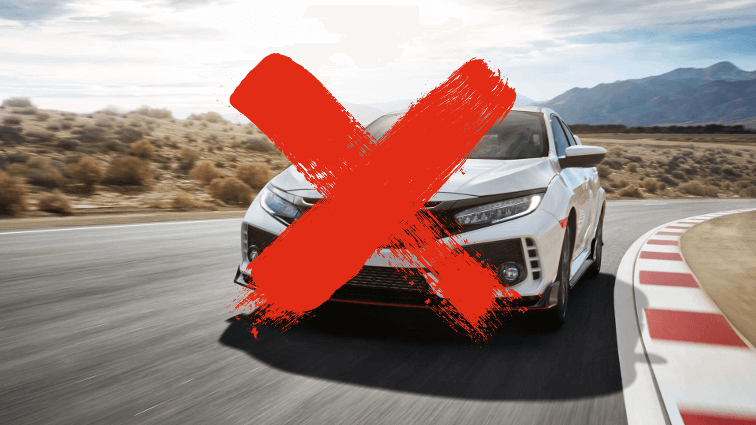 Maybe you think you can say you’re “driving it ironically”, no. That’s not a thing. You’re an idiot for saying that. Just have the balls to go against the grain and say you like the giant robot fighting aliens from the future styling.

I know, I know, a Civic isn’t all bad, they consistently get high marks from all of the reviewers (except this crotchety old curmudgeon), and the Type R comes with a healthy 300 HP under the hood. I guess if you’re in your teens or early 20’s, maybe you can be excused for youthful exuberance, but for literally everyone else on the planet, there’s much better options at the same price point if you don’t mind them coming in with a couple of miles already on the odometer.

Yep. A screaming V8 married to a 7 speed s-tronic dual-clutch transmission that dumps 450HP to one of the most advanced AWD systems in the industry could be yours for just a few hundred bucks more than the Civic. The Audi RS 5 also exudes class and refinement, something you definitely don’t find in the little Honda 4 pot.

As a 2014 it’s getting a bit long in the tooth for this list, but it still comes with all of the amenities and more that you would want in a proper driver’s car. Trust me, you’ll impress the ladies a lot more with the Audi’s Nappa leather seats than the Honda’s two tone bright red wannabe racers. Not to mention the 0-60 of 4.5 is nothing to sniff at either.

Another hot coupe, this one from BMW, you can get this one for 2k CHEAPER than the Honda. A BMW M240. FOR CHEAPER. Why are you still reading this? GO. GO BUY IT! My BMW fan-boyism aside, this is a great little car, and an absolute dream to drive. Autoweek has previously said that this is one of the best cars money can buy. It doesn’t have the same grunt as the big V8 in the Audi RS 5, but it does have a twin turbo inline-6 that produces a peppy 335HP with an 8 speed dual-clutch transmission that will hit 60 just as fast in 4.5 seconds. The little Bimmer of course comes with every modern convenience and then some, and will of course pass the same leather seat test and impress the ladies with the style and comfort.

I’ll be honest, I’m not the biggest fan of Infiniti, I think they’re starting to look a little dated, but that’s ok, the ladies like a guy with a bit of age and refinement…. Right… Right? You can get this basically brand new Infiniti for… yep, you guessed it, less than the Civic. It might not be as sporty, but you’ll still feel the 300HP 3.0 liter V6 pull with a 7 speed transmission up to 60 in a relaxing 5.5 seconds. (The Civic is only slightly faster at 5.2) As mentioned, the Infiniti is in desperate need of an update and nowhere is that more obvious than the interior, but it still manages to be refined with plenty of leather and quite a lot more subtlety than you’d find in the Civic.

Maybe you want some of that legendary Toyota/Lexus quality to put the Civic to shame? Well look no further than the Lexus RC 350 RWD. It does have a face only a mother could love, or a vacuum salesman, with its styling that looks like a hoover mated with a spaceship. But… You were looking at a Civic Type-R, so maybe you’ll appreciate the unusual lines? It does unfortunately sport red leather race seats like the Civic, so no real gains there, but it IS a Lexus, and it is powered by a 306 HP V6 with an 8 speed automatic. Being a Lexus, you might have a harder time catching the younger ladies eyes, but, I dunno, maybe you can drive your grandma to bingo? …. Why’d I include this on the list?

Yep. You read that right. You can snag yourself a big daddy Merc for less than a Honda Civic Type-R. The E class screams refinement, class, and “lawyer” so get ready for some fun in this bad boy. First up, does it pass the lady test? Are you kidding me? It’ll be like a slip n’slide buddy. The one thing the big Merc E-class is missing unfortunately is… power. It’s little 2.0 liter 4 pot only produces 241 HP and the 9 speed transmission unfortunately isn’t enough to save this monster executive machine. Weighing in at a… rotund… 3891lbs, it can only saunter up to 60 in 6.3 seconds. Make sure to point out the voice commands, that’ll keep the ladies busy…

If it wasn’t painfully obvious, I’d go for the little Bimmer, with the Audi being a close second. Would you take the Civic, or something else not on this list?